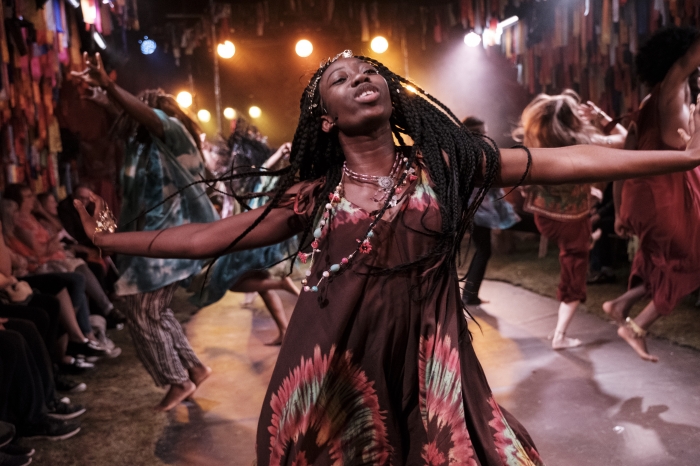 Andy Coxon has been cast in the iconic role of Berger, in the new 50th anniversary production of HAIR...

Rock musical HAIR opens at London’s fully immersive Off-West-End theatre, The Vaults, from Wednesday 4 October 2017 and is now to run to Saturday 13 January 2018.

The genuinely youthful cast will bring the original protest musical to life, in the intimate theatre seating just 200, revealing every emotion up close and personal through HAIR's drug fuelled journey.

HAIR changed the face of musical theatre and is still ground-breaking at the age of 50. HAIR opened off-Broadway in 1967, and to open this genuinely new production off-West-End in 2017 is the perfect move for Hope Mill Theatre’s acclaimed production, directed by Jonathan O’Boyle - as relevant now as it was in the 60s.

1967 and HAIR‘s hippie-hood youngsters live as The Tribe, in the East Village of New York: yearning to change the world, questioning authority and the American flag. They are wild, colourful, free, sexually liberated beautiful people who join in protest and song - under the shadow of the Vietnam War. Featuring classic hit songs: Aquarius, Let the Sun Shine In and Good Morning Star Shine - and the story of youth and war still resounds throughout the world making this a topical musical for the millennial generation. 2017 vividly sees the world protesting and marching, fighting for freedom of speech; from Trump to Brexit via Syria – the core spirit of HAIR.

Like a mini Woodstock, from the moment the audience arrive, The Vaults is transformed into a fully immersive 60s venue, with psychedelic, innovative creatives, iconic artwork and hippie flower power. With a 60s themed pop up restaurant and themed drinks; plus stalls including: vintage 60s and tie dye clothes, 60s smiley badges and memorabilia, hippie wigs and flower headdresses, vinyl’s – everything needed for a legal high. The audience then move through to the theatre space for HAIR - the musical that changed the face of the modern musical.

See below for full listings information…….

COME JOIN THE TRIBE – HAIR The 50th Anniversary production of HAIR transfers to London from its critically acclaimed run at the Hope Mill Theatre, Manchester.

Aria Entertainment - www.aria-entertainment.com Aria Entertainment was founded in 2012 by Katy Lipson. Katy has just been awarded the Best Producer award by the Off West End Awards and is a recipient of the Stage One Bursary and Start Up Award. Katy is currently lead producer on the UK Tour of The Addams Family and the 50th Anniversary production of Hair (London Vaults), which she originally co-produced with Hope Mill Theatre in 2016 - where she is Resident Producer and co-artistic director for in-house productions. She is also producing new musical The Toxic Avenger (The Arts Theatre, West End) post a run at The Edinburgh Festival's Pleasance Theatre and new musical Yank! (The Charing Cross Theatre). Recent productions include: tick, tick...BOOM! (Park Theatre); Yank!, Parade and Hair (Hope Mill Theatre); Promises, Promises and The Toxic Avenger (Southwark Playhouse); Vanities The Musical (Trafalgar Studios); See What I Wanna See and The Return Of The Soldier (Jermyn Street Theatre); Bar Mitzvah Boy (The Gatehouse); The Adventures of Pinocchio, Lizzie and The Who's Tommy (Greenwich Theatre), The House of Mirrors & Hearts supported by Grant For The Arts (Arcola Theatre) and Marry Me A Little, Jerry’s Girls and Forever Plaid (St James Studio). Katy is proud to have launched her annual From Page To Stage season of new musicals in 2014. Showcasing over 8 new musicals each year, the project was supported by Grant For The Arts in 2014, 2015 and 2016. The 2017 will take place this August at Andrew Lloyd-Webber's recently acquired theatre The Other Palace and is sponsored by RUG, TRW and RnH. Other current projects include: Pippin and Little Women (Hope Mill Theatre).

Hope Mill Theatre - www.hopemilltheatre.co.uk Hope Mill Theatre is situated in the Grade II Listed Hope Mill, a former cotton mill in the heart of Manchester. This 5-storey mill is home to a number of creatives’ studios including writers, artists and designers and now home to the award winning Hope Mill Theatre, a 120-seat fringe venue and events space, with the Engine Room Café and Bar. Hope Mill Theatre was the dream of couple Joseph Houston and William Whelton and opened in 2015. After a career in theatre and time spent living in London, they were inspired by the highly regarded Off West End Theatres and smaller producing venues which dominate the London theatre scene. With this in mind and with the growing number of creatives living in Manchester and the ever evolving theatre culture, they set out to bring a brand new theatre experience to the people of Manchester. In 2016, Hope Mill Theatre won the prestigious h.Club100 Theatre & Performance Award.