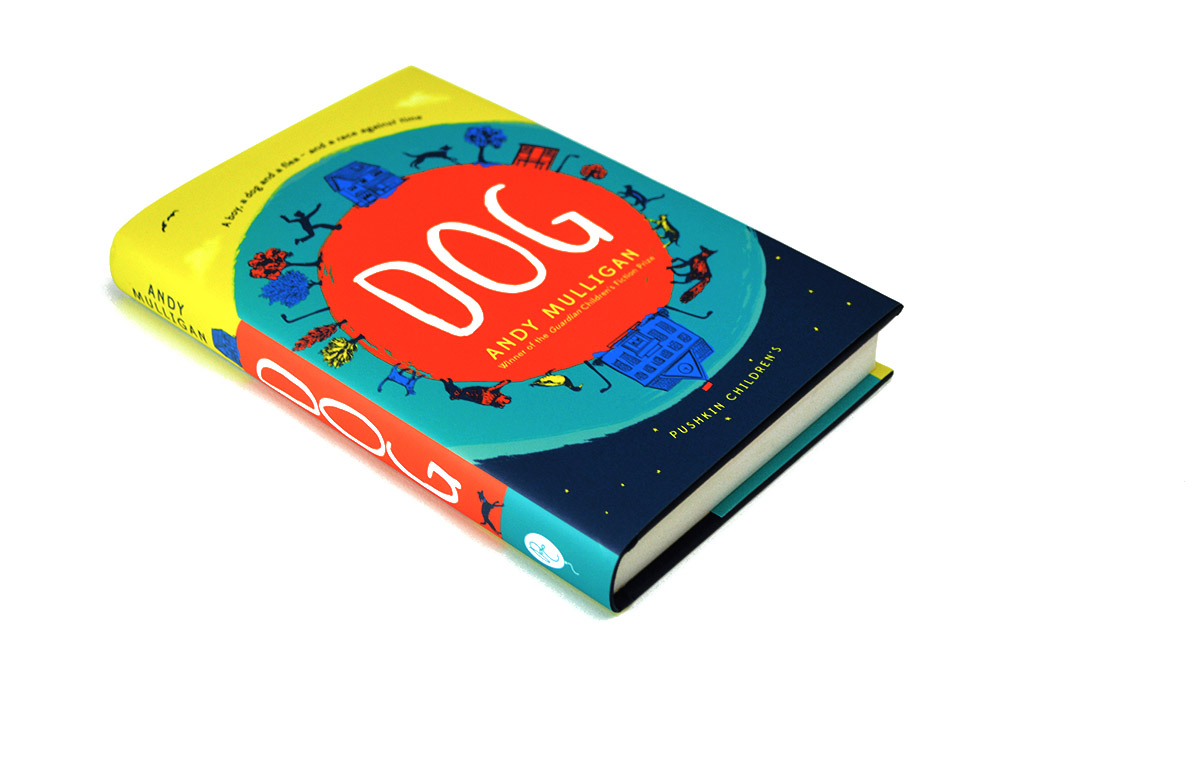 The Incredible Journey – A Boy and his Dog. An adventure about trust and friendship - that will give hope to readers young and old.

The extraordinary new novel DOG, by multi-award winning author Andy Mulligan (Trash), DOG is the incredible journey of a boy and his dog, or a dog and his boy. It’s a uniquely dark adventure exploring trust, friendship and fear of rejection. DOG will give hope to readers both young and old.

When Tom meets Spider he knows he’s found a friend for life. Sadly, the friendship doesn’t run smoothly. The puppy has instincts of his own and Tom has so much on his plate: a new school, his parents’ separation and some serious bullying... Both boy and dog will need more courage and determination than anyone could have imagined.

DOG is a tale of separation and reunion. The journey starts when Spider flees after a mad morning of misbehaviour. He chases a wild, seductive cat – but soon finds that the creatures he meets are never what they seem. He’s lied to by a spider, and shown pain and loss by a moth. A fox reveals the sheer cruelty of life – a flea displays inspirational strength – and a mad bull dog teaches him about loyalty and love. Spider’s encounters are all bizarre reflections of Tom’s own troubled world as the boy refuses to accept his friend’s absence. But the world is so wide, and they’ve been torn apart! Will they ever find each other?

Renowned editor Sarah Odedina has recently joined Pushkin Children’s Books as their Editor-at-Large. Sarah has wanted to work with Andy ever since she was the very disappointed under bidder for his novel Trash! Sarah says: “Andy is that exceptional literary talent who has the ability to appeal to all. Andy pulls off a rare feat in DOG, writing a fantastic fast-paced adventure with great emotional depth. I doubt that there are many readers who will be able to resist the delights of this wonderful book.”

Andy says: “I was talking at a primary school when a little boy interrupted with the classic non-sequitur: ‘Hey, mister. I’ve got a dog.’ ‘That’s nice,’ I said, as everybody laughed. ‘No, it’s not,’ said the boy, seriously. ‘He wants to be a cat.’ That night I started writing about a pet in crisis. I invented a puppy with paralysing doubts about his instincts and orientation, and out came DOG: a troubled book, but so full of joy. It was a joy to write, anyway.”

DOG – a classic book for our time.

Andy Mulligan was brought up in south London. He has taught in the Philippines, India, Brazil, Vietnam and the UK. His first novel Ribblestrop was shortlisted for the Roald Dahl Funny Books Prize, and his second book won The Guardian Children’s Fiction Prize. Trash was shortlisted for the Carnegie Prize, has been translated into 31 languages and the movie was directed by Stephen Daldry. www.andymulliganbooks.com

Sarah Odedina is Pushkin Children’s Books new Editor-at-Large. Sarah has worked in publishing since 1989 and most of that time in the world of books for young readers. She was the Publisher of Bloomsbury Children’s Books for 14 years where she worked with J.K. Rowling on the Harry Potter series as well as commissioned the first children’s books by Neil Gaiman. During her career she has published four Carnegie winning titles as well as Prinz Award, Costa, Guardian and Smarties prize winning books. As an editor she looks for great characters in wonderful plot driven stories. She reads widely and enjoys everything from baby board books to teen historical fiction, adult crime novels and literary fiction. She likes to travel and has for the last decade had a particular interest in visiting Brazil, particularly the North East of the country. Sarah is the co-founder of SCOOP, a monthly magazine for young readers and has just been made a trustee for the Poetry Translation Centre.

Pushkin Press and Pushkin Children's Books Pushkin Children's Books which launched with its first books in 2013. Pushkin Press was founded in 1997, and publishes novels, essays, memoirs, children’s books - everything from timeless classics to the urgent and contemporary. Our books represent exciting, high-quality writing from around the world: we publish some of the twentieth century’s most widely acclaimed, brilliant authors such as Stefan Zweig, Teffi and Antal Szerb, as well as compelling and award-winning contemporary writers, including Edith Pearlman, Eka Kurniawan and Ayelet Gundar-Goshen.

The Pushkin Children's Books list launched in spring 2013 and is perhaps best know for the outsized success of the rediscovered 1962 Dutch children's novel The Letter for the King by Tonke Dragt followed by the sequel The Secrets of the Wild Wood, both of which appeared in English for the first time ever with Pushkin.

Other key children's titles from Pushkin include The Beginning Woods by Malcolm McNeill, Maresi by Maria Turtschaninoff as well as The Wildings by Nilanjana Roy, shortlisted for the Waterstones Children's Book Prize 2017.