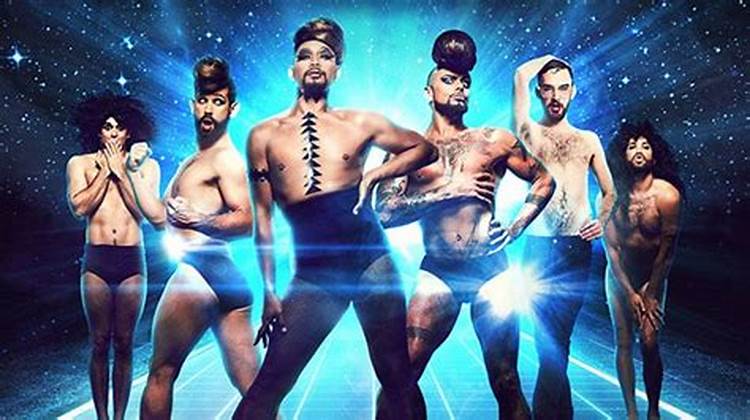 The world’s hottest all-male boylesque group will grab Christmas by the baubles in their dazzling headlining show BRIEFS: CLOSE ENCOUNTERS as it smashes into the stunning Leicester Square Spiegeltent for the festive season from 9 November 2018 – 3 January 2019 (press night Wednesday 14 November 2018 at 7.30pm – runs 100 minutes).

BRIEFS: CLOSE ENCOUNTERS is an insanely uplifting show as the Briefs boys blend and bend the rules with their out of this world circus skills, drop dead gorgeous drag, raucous comedy, and trademark punkish swagger. Briefs: Close Encounters is unique, magnificently slick and genre-defying spectacular show that gloriously breaks all the rules as it takes its audience to the third dimension! Seriously, the perfect night out for everyone 16+ over the festive season!

This masculine troupe of seriously gorgeous guys from Oz is led by the beautiful, sassy and fabulous emcee, Shivannah, aka Artistic Director Fez Fa’anana. The cast of buff characters includes: one of Australia’s leading circus showmen Captain Kidd (2011’s Las Vegas King of Burlesque); acrobat and clownish time-hopping rabbit Dale Woodbridge-Brown (Kamilaroi boy and proud of his Aboriginal heritage); superstar aerialist Thomas Worrell, defying gravity and tying himself in knots above the crowd; the magnificent dancer Brett Rosengreen who is Briefs’ very own James Dean meets cheeky cherub; and the youngest member of Briefs, the loveable rogue and boy wonder Louis Biggs, who steals the hearts of audiences throughout the show. Finally, a Brit has landed in the hallowed troupe: Harry Clayton-Wright is the Blackpool boy done good, an anarchic provocateur, performance artist and so much more!

Briefs Factory celebrates 10 years by breaking through the glass ceiling and explode on London’s West End scene with the life affirming BRIEFS: CLOSE ENCOUNTERS, as the Briefs warriors journey through space to the future where there is a place for everyone. What more could you want from a joyous and celebratory festive show?!

BRIEFS: CLOSE ENCOUNTERS = Christmas with a glitter ball on top!!

BRAT KIDS CARNIVAL – is a high-energy super fun variety show for all the family from tots to teenagers (4+). Mischief makers Briefs have created a noisy, fun show for kids who love spectacle, top notch circus skills, flying acrobatics, edgy dancing, pumping music and cheeky clowning antics. This show holds its young audience in high regard with nothing wishy-washy: this is something unique, involved and inclusive. Put on your party outfit and express yourself with a boogie (on stage!) at the BRAT KIDS CARNIVAL! The 45 minute children’s show will play during the daytime from Saturday 10 November – Saturday 30 December 2018.

And finally CLUB BRIEFS: NYE EXTRAVAGANZA! – the only place to be on New Year’s Eve! Trash, glamour, disco, circus and guaranteed hilarity from the Briefs boys and spectacular special guests. Dress code: extravagance! Live your best life and feel the fantasy as Club Briefs countdown in the capital to 2019!

The festive season starts in the magical Leicester Square Spiegeltent with BRIEFS: CLOSE ENCOUNTERS – where all your Christmas wishes come true!

And enjoy as Christmas in Leicester Square is transformed into a wintery haven - the destination for all your festive fun with Santa’s Grotto, Christmas market, bars and food!